A NICE AWARD FOR THE BEAR! (Not a part of the A-Z Challenge — Well, but actually it is)

This delightful gift, The Liebster Award, is from Jamie at Being Positive with a Depressive Soul. She and I both live with depression; a pair of depressives do an interesting conversation make.

Now, the confession. There are instructions that come with this award. For those of you not familiar with the Bear, Bear is terrible at following instructions. If someone said to me, "Go to Hell," that person would have to provide a detailed map. Even then I might not make it.

Here are the instructions:

These are the Rules nominees are supposed to follow:
1. The Liebster is given by bloggers to other bloggers who have less than 200 followers.
2. Each blogger should post eleven facts about himself or herself.
3. Each blogger should answer the 11 questions that are asked by the person doing the nominating.
4. Choose eleven new bloggers to nominate for the Award and link to them in the post.
5. Create eleven new questions for your nominees.
6. Go back to their pages and tell them they’ve been nominated.
7. No tag backs.


Instruction 1   Less than 200 followers.
Yes, Bear (also known as the Bear) falls into that category.
Whew. That was no work at all. Maybe this won't be so tough.

Instruction 2  Eleven facts about the Bear.
OK, you know about my problem with instructions, right?  On the other hand, this is a chance to introduce myself more fully to those not familiar with me.

a. I was born after World War Two, but I'm too old to be a Baby Boomer. Hence, I was born a mis-fit, a situation which I have repeatedly demonstrated in my life.
b. I was born at the centre of the universe (Toronto, Canada). There are many who don't know about that geographic distinction. Or pretend not to know.
c. Toronto (actually, North York) was my home for the first 25 years of my life (minus a couple of months).
d. During that time, I earned two University degrees. They did not give me the "third degree" in the process. Or so they claim.
e. At the age of 25 (minus a couple of months), I, my wife, our unborn son, and dog Sandie, went west. NO, I was not following the instructions of Horace Greeley. I was following the instructions of The United Church of Canada, which can send newly-ordained ministers wherever it wants. So I got to the west by the grace of God and the will of two committees. (That's how a Church really works!)
f. I began my practice of ministry in a town called Hudson Bay (which was nowhere near that Bay). I practiced, and practiced, and practiced, and still did not get it right. So I changed careers.
g. By that time, we had a son and a daughter. And I had had a surgical procedure to ensure we had no more of either.
h. The career into which I switched was radio news, which I did for a decade. It was a good time.
i. It was radio news which brought me to "River City," after which I went back to being a minister. (Confusing, I realize.)  j. I did post-graduate training at River City's University, in Ethics, and established myself in my third profession, without having received the "third degree" (mentioned above).

Instruction 3   Answer some questions from the Award-Giver.
Here is what I had to deal with:
a. Coke or Pepsi?  "What's the difference?" Bear said, as the space ship lowered behind him.
b. Why do you blog?  Because I like writing, and have done it for a huge part of my life. (I have even won some awards for my journalistic work.)
c. If you could change your name, what name would you chose?   Why would I want to change my name from Rob-bear?
d. Beach, country, or city person? Pre-Cambrian rock, coniferous forest, rivers and lakes. Beautiful country life!
e. If you could trade places with someone for a day, who and why?  The pope. It would be a very different experience of life, and would help me understand things from a different perspective (for this Protestant). Or the Dalai Lama.
f. Purses or shoes? Have you ever seen a Bear with either?
g. Chocolate or Peanut Butter?  Combined.
h. Favourite Colour? Teal. Plum would be a close second.
i. Favourite musician? Stan Rogers (Canadian guy).
j. Favourite blogger? In American terms, I'm pleading the fifth (amendment). As opposed to the fifth of gin.

Instruction 4   Nominate Eleven bloggers for this award (they must have less than 200 followers)
So, in no particular order:

a. Reffie at Confessions of a Reforming Geek
b. Helen at Poetry Matters.
c. susan at phantsythat
d. Karen (kj) at Options for a Better World
e. Janie at That Janie Girl
f. DJan at DJan-ity
g. The Blog Fodder at The Blog Fodder
h. Amanda at Travels with Persephone
i. Carol at Better is Possible
j. Cathie at Life on the Muskoka River
k. J. Cosmo Newbery at Notes on a Serviette (Occasionally X-rated, without warning!)

Several of my best blogger friends didn't make the cut because they have too any followers. Sadly.

Instruction 5   Eleven Questions for Award Recipients.
This is the HARD part.

a. Tea or coffee?
b. Right-handed or left handed?
c. Hair color? Real or commercial (dyed)?
d. What is your place in the birth order of the children in your family?
e. What languages do you use (speak and/or write)?
f. How far from your home have you travelled?
g. Plane, train, or car?
h. Would you like to go into space? (Not the same as being spaced out.) If so, where?
i. What is your favourite colour?
j. If you could be someone else for a day, who would you be?
k. Do you have a favourite blogger? If so, who?

So, I've been a good Bear and followed the instructions. Now I will claim my award! 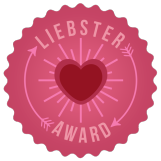 BTW, did you know that Liebster means "dearer" in English. That Bears more investigation.

(If you're one the eleven recipients I've listed, I'm coming to get you!)

So glad you've dropped by the Bear's den. Please leave a note -- getting notes is such fun, and often informative. I'll get back to you, here or by e-mail, as soon as I can (or, if it's winter, after I wake up). 'Til then, please Bear with me.
PLEASE NOTE: THIS IS AN AWARD-FREE AND MEME-FREE SITE. While I'm honoured to receive awards, I find they take way too much energy in completing. Thanks, but no, thanks.