IN WHICH IL A NEIGE!

The predictable has happened. Though a few days later than expected. We've received 20 centimetres of snow (or about eight inches) over the last few days — more where the wind has piled it up. 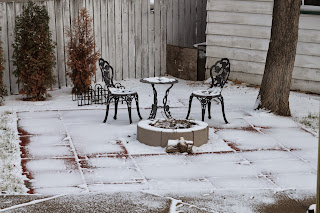 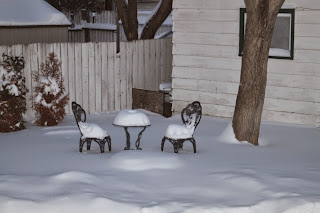 But that is just one aspect of reality. J suspected the back lane would be full of the white, fluffy stiff, and that I might have trouble getting out to worship tomorrow morning. She was right. 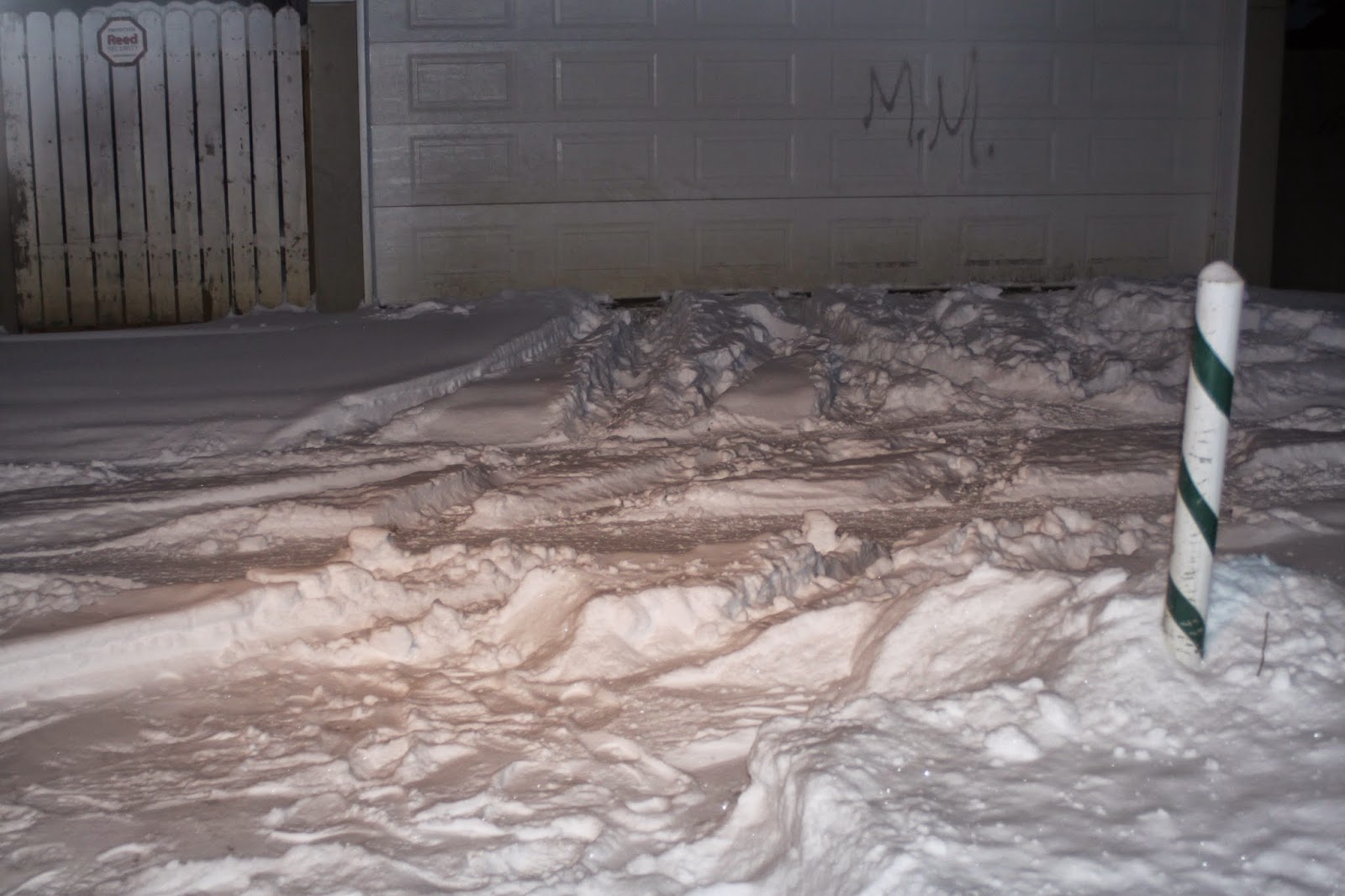 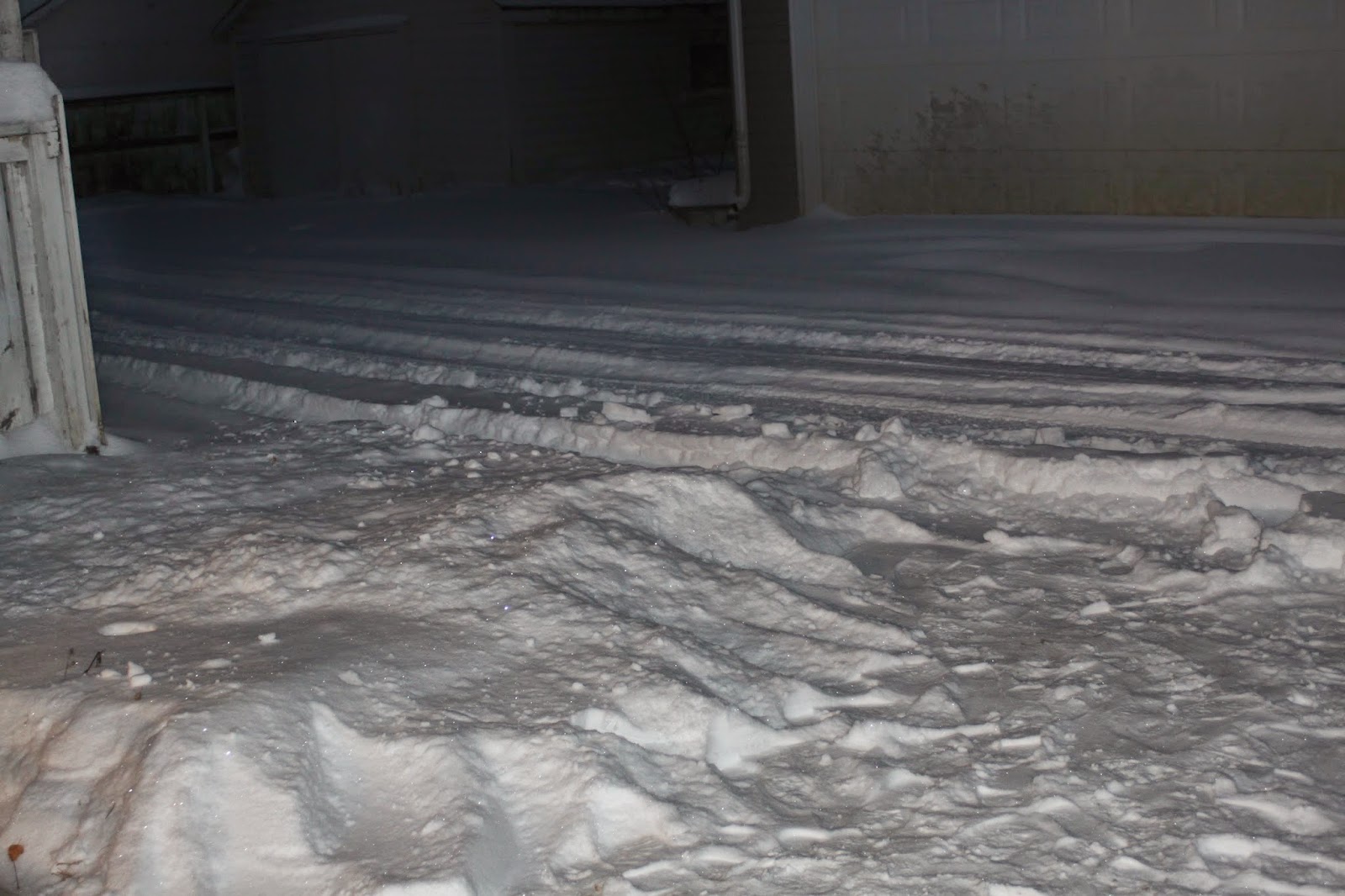 So, as you can see, I did some shovelling.

There is noting particularly bad in this. The snow was above my boot tops, but I managed to get things cleaned with not too much trouble. Fortunately, my back-lane neighbour had been through with his 4x4 pick-up truck, so the laneway would be relatively clear for the morning. Good tracks to follow. Unless they get blown in.

The complicating factor here is the temperature. The thermometer just outside our back door says. . . . 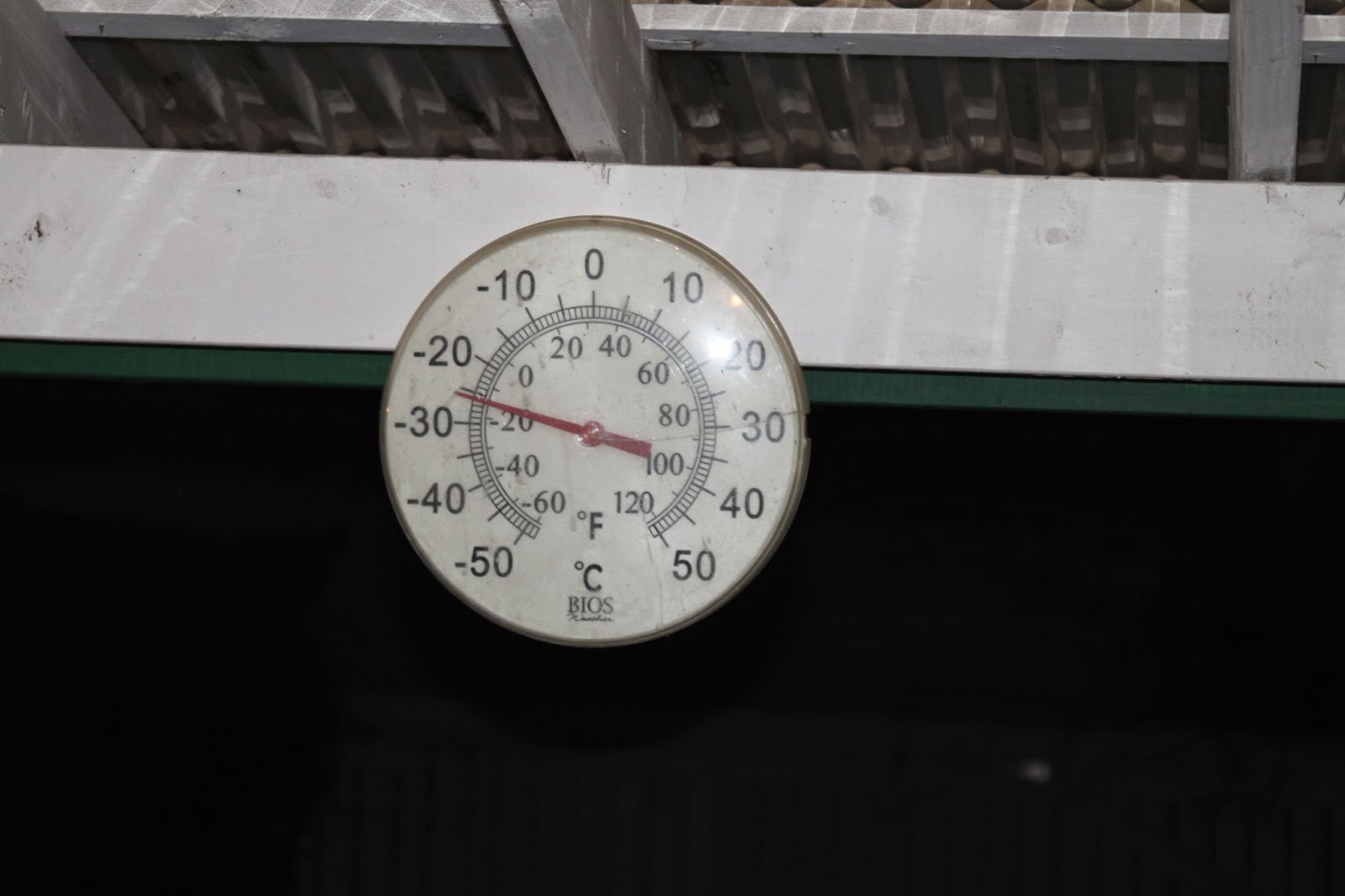 Yes, that is -26°C (or about -15F). That's only part of the story. It's going to fall further tonight. How low you ask? To about -38C (or about -36F — if you count things that way). Which means we've been receiving a cold weather warning from Environment Canada. Another brisk, fresh, bracing evening. Truly!

The first thing is to build a really good fire in the fireplace. Ahhh!!

Then do some light reading (about our perceptions of aging in North American society). For example, what do you feel is good, or not so good, about a picture of a 90-year-old woman wearing a bikini? (Remember, that could be your mum or grandma!)

In the process, I'll have a couple of mugs of mead (a drink made from fermented honey — a great favourite of the Celts, as well as Bears).

Finally, I'll grab a couple of blankets and head for my den. For a long winter's nap. Yes!!

See you in the spring.

Blessings and Bear hugs until then!

COLD! Were you expecting something else?

IN WHICH BEAR GETS A MOVE-ON

Well, life is certainly not completely boring, at least in the land of the Bear. Even when I'm not hibernating, when I should be.

Lately, I've been out dog-walking in the "fresh" air. No, it hasn't been with my beloved Sadie. It's been Wally.

Some of you may remember Wally from the past. 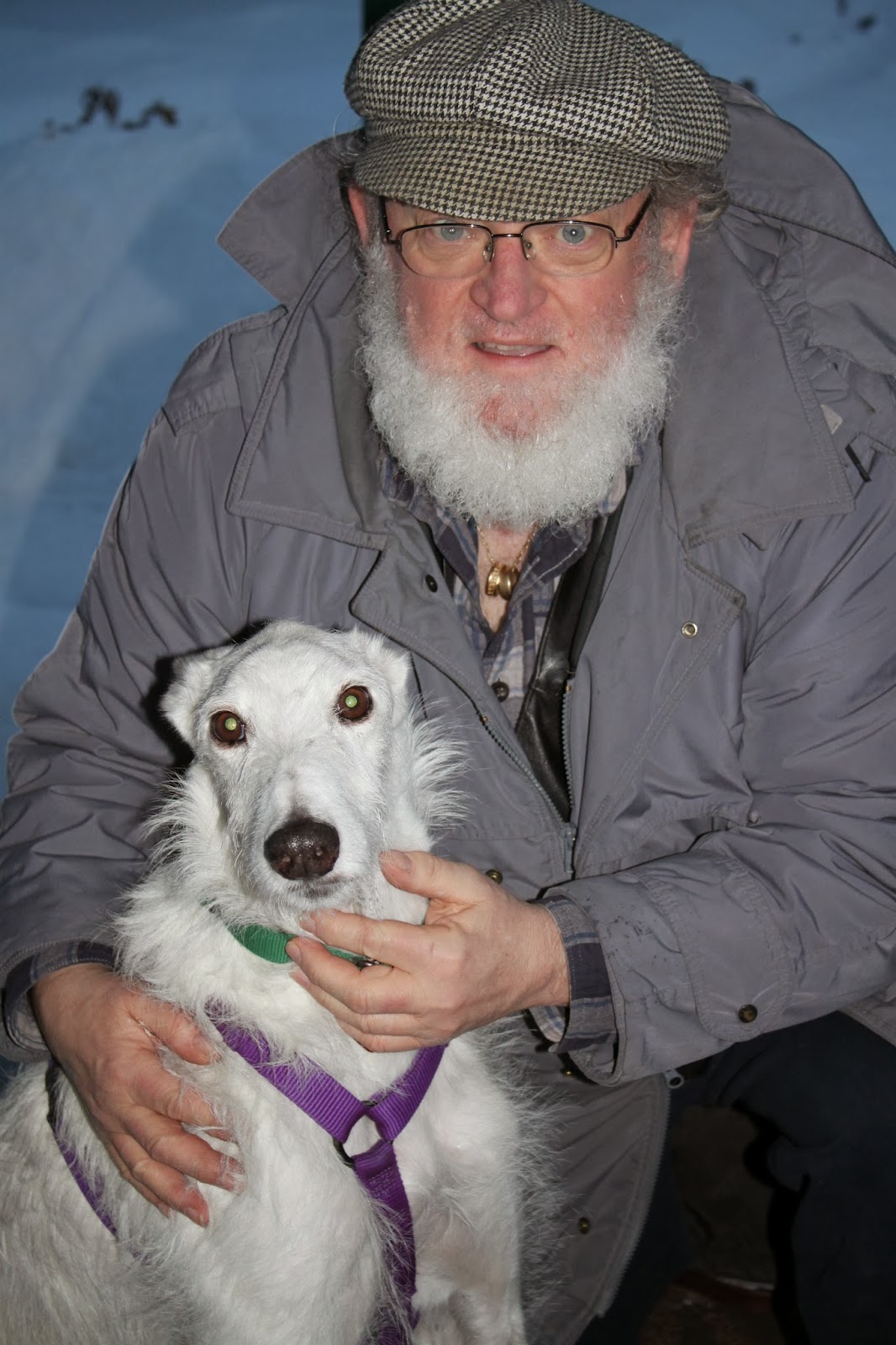 Wally is our daughter-in-law's dog. He's part Greyhound, and part something else. He is strong enough to move me around, even when I don't want to move. (I'm sure he could run down a fox or coyote quite easily if he wanted to.) But since A is on a course at the university, it's easier for me to walk him than for her to come home, walk him, and go back to the University. That plan makes no sense. At all.

But I also have another walking companion now. He's named Arth. (His full name is Arth Ritis, but we're not that formal.) Arth limits my walking ability when Wally and I go out. And at other times, too.

When I get home, however, some of Arth's sworn enemies come to help me. There's Mr. Ben Gay and, more commonly, Mr. Volt Arin. They rub me the right way. There's also Ms. Aceta Min Ophen. Ms. Ophen says, "Take a couple of these, and if you need more help, I'll be back in four to six hours and you can have some more of me." She's really very kind and helpful.

So, I can call on Mr. Gay or Mr. Arin, and Ms. Ophen, when I need their help. But, really, I'd rather just lose Arth. But he's made it very clear that he's going to be around for a while. Even when I'm trying to hibernate.

There is a video of a woman walking for hours through the streets of New York city, which shares pictures of her and any recorded conversation. I've seen the video. A number of people made very sexist remarks, which even your Bear found offensive. But other people people said a friendly, "Hello" or "Good Morning." Yet all of those encounters were lumped in as harassment. I really don't get that. (BTW, I've been looking for that video, but haven't found it again. Otherwise I would have shared it, right here and right now.)

Here in Canada, we try to encourage friendliness. Indeed, the Community Association in one part of River City was encouraging people to greet one another on the sidewalks (or wherever) when they meet. I mean, really, is it so hard to say "Hello" to people you pass on the street? I remember an old saying: "If you see someone without a smile, give him (or her) one of yours." Is that so difficult?

When saying "hello" to people is harassment, it seems to me we have crossed some invisible line of what is just plain appropriate, and what is ridiculous. Too much political correctness, maybe. It seems more and more people are offended by simple, kind and well-intended things. What have we come to? Really?

But maybe I'm just being too Canadian, eh?

Blessings and Bear hugs, friends. (Unless you're offended by that.)

WELL, THIS IS INTERESTING

It happened when I wasn't expecting it to happen. Though I should have.

After all, it is early November. And the temperature was below freezing (O°C or 32F) overnight.

By noon, I could see that the more adventurous were out and about, despite icy streets. Or, more correctly, turning the streets to ice. (The smart ones, as you can see, are walking. Carefully.)

I don't know whether the snow will stay more than a day or so, even though the temperatures will be below freezing. The ground was comparatively warm and wet when the show fell. So, for those of you in Texas, or San Diego, I'm sorry; we don't have enough snow to send you some. At least not yet.

But of course, good friends and readers, you know what this means. Yes! IT'S HIBERNATION TIME! Meaning that I'll be gone until next spring. Unless, of course
• there is a really nice day, when it's sunny and warm, and I just have to get out and stretch, or
• I get bounced, either by Tigger, or by our grandchildren (when they come for a visit — which is at least once every week).

Do I expect to be out from hibernation at some point? Absolutely. I'm sure that Finnegan and/or Keira will "bounce" me, sometime, if nothing else. Grandchildren are so lovely, and so much fun, and so predictable. At least ours are. (And probably yours, too!) They WILL find me. "Granddad, are you awake?" they will inquire (even though I look like I'm sound asleep). I can already hear that inside my head. Life is nothing if not "interesting," when you're a Bear. Especially a Brown Bear in Canada.

GREY SKIES FROWNING AT ME, WHILE I TRY TO SMILE

We have had quite a bit of rain recently. Even a bit of snow, (but that doesn't count, because it didn't stay for at least 12 hours).

What that means is we have had a lot of grey, cloudy days. November kinds of days.

"GRRRrrr" is the appropriate response to all that.

It's close to hibernating weather, but not quite. Not cold enough. So I'm dragging myself around; not quite hibernating, not quite awake.

I was over at Fishduckys blog earlier today. She was quoting Mark Twain, and a number of Twain's thoughts seemed appropriate for the day after a mid-term election.

"Sometimes I wonder whether the world is being run by smart people who are putting us on or by imbeciles who really mean it."

"It's easier to fool people than to convince them that they have been fooled."

That last one is particularly true. If you have enough money to saturate an area with television advertising, you can get people to believe that lies are the truth, and that the truth is a pack of lies. You can convince people to vote against their best interests, and support the very different interests of others. (It's called "The Big Lie" process.) Reporter Andy Borowitz, in The New York Times, says, that since the Citizens United case has been upheld by the US Supreme Court, it costs about four billion dollars to buy a member of congress. Yup; four billion. All, I assume, for election expenses. (It's hard to recall that Borowitz is actually writing satire; he seems so realistic and truthful.)

We, in Canada, are going to have a Federal (national) Election in a bit less than a year. The Conservatives are in power. To understand Canadian Conservatives you need to realize that they are just a bit more conservative than the Kock brothers "Tea Party."  (Meaning they are more like Fascists.) They take most of their strategy from the US Republican play book. They are far more conservative than most Canadians (except for Christian fundamentalists, some of whom form the party's base of support). A court has found that the Conservatives clearly engaged in electoral fraud, in order to win the last Federal Election. Many people expect the Conservatives will do the same again in this upcoming election. For the record, the Conservatives normal response is to thumb their noses at the courts. Sigh!

Oh. Wait! It looks like there is some sun breaking through the clouds. This could be a nice day, after all.

Now, if I could just find Miss Sadie!


Today's Weather Report
Mainly sunny, with a temperature of 4C (or a balmy 40°F). Overnight, it will feel like about -9C (a fresh 16F). Remember to wear your socks and mittens to bed, and have something to cover your head.