your worst fears about Bear have not come true. I have not been shot and turned into a Bear rug. (I may be a bit rugged, but not that kind of rugged.) I have not been taken off to jail for what I've been writing on Facebook. (That's been a bit of a fear, with the new security law that our Conservative government has imposed on our nation. Even more "interesting" than the Patriot Act in the US.)

However, I have been, um, well, busy.

1. We managed through the heat and tiredness of the summer. I'm finding that I get very tired many days. But now that I've turned 70, I'm not as young as I used to feel. So I was draggy over the summer.

2. There were a lot of forest fires in the early summer.  They were generally hundreds of miles away. But we felt the effect. The government moved hundreds, eventually thousands, of people into River City from threatened areas. And we were nearly smoked out of our homes. 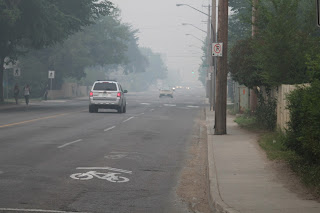 Normally, we can look along 19th street (above) and see key downtown buildings. But not this day — when everything disappeared into a smoky grey cloud. It was so thick you could taste it this day. And I almost resorted to wearing a mask because the smoke was hard on my lungs.

3. We were finding it harder and harder to keep up the house. J in particular, on the inside; me, on the outside.

4. J was supposed to have additional surgery this summer. Doctors ran into trouble almost immediately, repaired the problem they created, and quit while they were ahead. (Or was it behind?) So, it may be close to Christmas when she has the planned surgery.

5. We rented a suite in a condo to help J post-surgery. That was, of course, before the surgery — or non-surgery. Anyhow, it's really nice.

6. After considering numbers 3 and 4, we decided to sell the house. I put it on Kijiji one day, and sold it the next. Yup, the next day! It was bought by a young couple with two small kids — mom had grown up in the area and knew the kind of house she wanted, and which streets and blocks would be best. She sold it to her husband and father; I didn't have to do much except encourage them to sign the forms from our lawyer. (Why bother with real estate fees when you and your lawyer can do the work?) 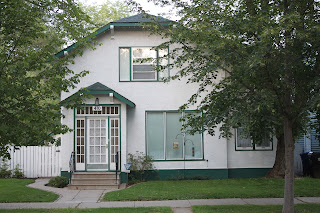 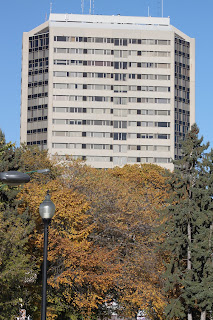 among the trees. (It's actually a condo, but a number of the suites were bought as rental properties, and we got one of those. Normally the condo units sell for about half a million dollars; we are definitely not that rich!)

And that's enough for one report. I hope to be back within a week to share more interesting information with you.

Blessing and Bear hugs, everyone!


Today's Weather Report
It's very foggy outside, and 10°C (or 50F). Things are supposed to clear up, and hit 18C (about 65F) this afternoon. Tonight — about 8C with "variable cloudiness." Definitely fall weather. "Winter is coming," as they say on the Game of Thrones.