I recently wrote a letter to the newspaper about the sad state of affairs in our city. I have begun to describe that situation in the first part of "Pity Poor Saskatoon." Today the my thoughts appeared in the "Letters to the Editor" section of the paper -- albeit in an edited form.

It’s Saskatoon's election time. And John Gormley (with his “usual gang of suspects”) is back with GAAG. (That’s short for “Gormley Against Anything Good.”)

Gormley mentions a “Gang of Four” on Council (“The Politics of City Election Campaigns,” Oct.16/09) but says less about Council’s other seven “gang-sters.” What Gormley missed is their thinking about urban development, which he perhaps shares. They’re firmly stuck in the 1970s. This is 2009.

Saskatoon’s deeply in debt, instead of using a sustainable, “pay as you go” development policy. That debt level is 1970’s thinking. Watch for taxes to rise significantly or services to be cut drastically.

We had the Gathercole building, then the Gathercole site, then Parcel Y; now it’s the “Atch hole.” Will Lake Placid ever build there? Perhaps the City's accepted a “pig in a poke.” That overall lack of planning major developments is 1970’s thinking. And how long will the “Barry vacant lot” sit vacant?

Consider the Farmers' Market. Built too small, in the wrong place, without enough parking, and streets too narrow. That’s 1970’s thinking. (It’s so crowded I, like many others, rarely go there any more.)

And the mayor wants to turn the Farmers’ Market to a kind of General Store, because he doesn’t understand Farmers' Markets. That’s pre-1970’s thinking.

The new bridges -- Preston over Circle Drive and the south-west Circle Drive Bridge. Where are the spaces for future LRT (Light Rail Transit), that we'll need to move Saskatoon’s growing population? No LRT. That’s 1970’s thinking.

Recycling is important. Community-University research has shown that more than half of what goes into Saskatoon’s land fill can be re-used or re-cycled. That would save the city money and extend the life of our current land fill. But, no civic curb-side recycling here. More 1970’s thinking.

Just to fill in the blanks, John Gormley is a lawyer who was a Conservative Member of Parliament for a time. He makes his living as a radio talk show host these days. He's just touch to the right; he thinks Attila the Hun was a socialist. When he speaks of those with who he disagree he calls them "the usual gang of suspects."

"Saskatoon Shines" is the big advertising motto the city is using currently.

Curb-side recycling (usually done by the City itself) is a feature of many Canadian cities, often much smaller than ours.

Some of the other elements are explained in previous postings.

The reference to "Atch hole" is to our Mayor, Don Atchison. The community largely wanted the Farmers' Market to go on the Gathercole site. But Mayor Atch (who is up for re-election) has an "edifice complex" -- a Farmers' Market is too simplistic and dull for such a great site. Sigh!

We're getting close to our civic election. It comes in less than a week -- October 28th.

A lot of people are saying things are pretty good in Saskatoon. Yes, a lot of fancy things have been done along the river in the downtown. But where are the items of substance?

Where is Lake Placid's "River Landing" development, which should be close to finished now, but hasn't even been started? It's supposed to be the "anchor" of our city's downtown redevelopment. (See my earlier post on "Fort Gathercole.")

Where is "Station 20 West" -- the grocery store and service centre for the people in one of our poorest neighbourhoods, who desperately want and need a grocery store? The Provincial Government originally promised significant financial support to the project. They we had an election, and a different party formed the government. The new party canceled the deal with the poor, the old, the sick, and citizens in general. 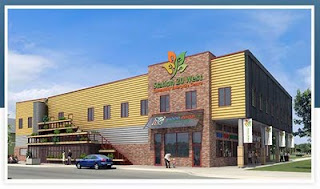 Where is the long-promised childrens' hospital that we need for our province?

Where in the new Oliver Lodge -- a long-term care for seniors in poorer health? The provincial government promised money about 20 years ago for that. So far the only thing that has been accoplished is the demolition of the oldest wing of the existing building.

Why has our city council incorporated a new art gallery, instead of fixing the existing one? The new building will be much more expensive (if memory serves correctly). 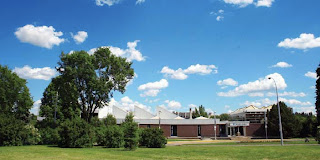 (Mendel Art Gallery)
On top of all that, the mayor and his associates on Council have driven the City deep into debt, and have raised the tax rate 20% in the last 6 years.

And the number and value of building permits this year is way down.

The saying is that, "Saskatoon Shines." To me, Saskatoon has a dull glow at the best. Maybe "rot" better describes what's beginning to show.
√
Posted by Rob-bear at 13:53 3 comments:

IN PRAISE OF COALITIONS

What Canada needs is a reasonable and effective coalition government. We need a government where people can work together, to solve the problems and build on the strengths of our nation.

Unfortunately, that isn’t likely to happen, because of the personalities involved.

There is nothing new, strange, or illegal about coalition governments. They have been, and can be, very effective.

Coalitions represent a wide range of thought, much like the thinking of Canadian people. That’s a good thing: we all don’t always think alike agree on everything. If we did, life would be pretty boring. And there would be no chance for change. However, we do think differently; we see situations differently; we see varying opportunities for the future. I think this diversity of thought is good.

As I have written before, much of Canada was built by people from very different backgrounds working together to solve common problems. They knew that if they didn’t work together, they wouldn’t survive, individually or collectively. That reality hasn’t changed.

On the other hand, single-party majority government’s don’t have the same sensitivity to the wide variety of thinking among Canadians voters.

Of course, we almost had a second coalition government in Canada last December, involving the Liberals and New Democrats, with the tacit support of the Bloc Québecois. That would have been a bit different, in that coalitions are usually formed at the request of the ruling Prime Minister. But Stephen Harper recognized the problem, and ran like a dog with his tail between his legs -- to the Governor General. It apparently took a fair amount of convincing, but Michael Jean bailed him out.

But that tells us why we are not likely to have a coalition government.

We have adult men and women in our Parliament who are content to play “king of the hill” like little boys and girls. Stephen Harper is lusting after a majority government, so he can enforce radical change on Canada -- until the country no longer resembles what it has been (to paraphrase one of his more “interesting” statements). We have Michael Ignatieff, brighter and more experienced than Harper, but less politically seasoned, lusting after the same job. We have Jack Layton dreaming of more power. So these personal ambitions prevent the collaborative, community-building approach that our country needs at a difficult and challenging time. Which is not at all helpful.

(This was originally written for The Western Producer, a Canadian newspaper, and published October 8, 2009. It speaks of a number of British parallels.)
√