ANY PORT IN A STORM

Three families of Geese, about 40 babies altogether, looking for a chance to get out of the fast-flowing river. 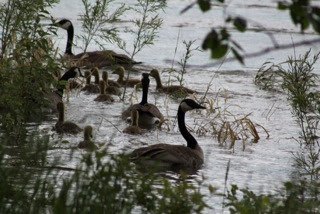 The spot where they initially took refuge was too dark for a good picture. But it was sheltered enough to provide them with some rest in a nicely-camouflaged backwater.

Even the water birds are having a tough time with the flooding.

IN WHICH WE CONSIDER THE LITTLE PUDDLE THAT GREW 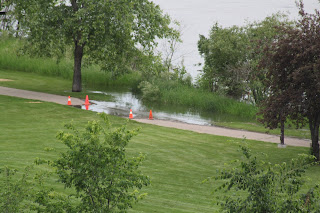 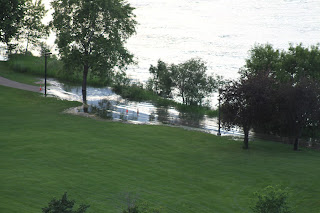 The City of Saskatoon claims that this is as high as the water will get (honest!). Some residents aren't so sure. But the City has lowered the danger level form 2 to 1. So, that's that.

But even some of out city's water-lovers are finding the situation challenging.


On Sunday, three families of   Canada Geese were swimming upriver, trying to find a place where they could safely come ashore. No problem for the adults; major challenge for the babies.


The current was very strong and every one of them was looking tired. They all need a break from that.


Finally they found a sheltered spot, and had a chance to rest and regroup. One of the three families had 20 babies.

They finally came ashore from that temporary rest spot. One of the adults climbed to the top of the bank. It stayed there, nibbling away on the grass, as nonchalant as could be. But the babies already knew the rule; don't go any farther than that adult. In fact we didn't see them; they stayed well out of sight. But there was lots of shore for all of them to come up for a rest.

I was thinking of trying to slowly move around and get a family photo. I decided not to. They had come from two bridges below (one guy, walking along the bank, was following them). So I just decided to let them be. The click of the camera could have scared them off. They needed the break from the strong river.

Blessings and Bear hugs, one and all!

IN WHICH THE "FLOOD" COMES

Well, we can't say they didn't warn us.  A significant portion of the Bears' side of the South Saskatchewan River has been covered when the river overflowed its banks. 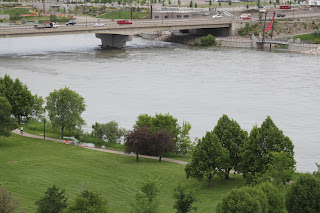 What do you mean that you can't see it? It's right there before your face! Good grief, are your eyes getting as bad as the Bear's? I surely hope not!

What? You need a bigger picture? Ok, then; look. 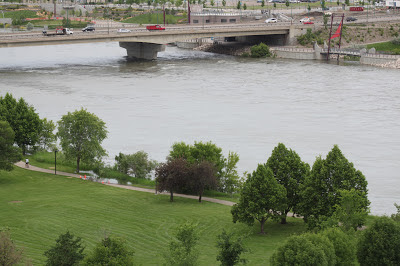 The things I do for you readers! 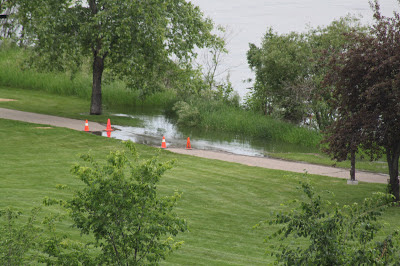 The flooded patch covers about a couple of metres/yards each way. That's the total extent of the flooding on the south side of the river.  Not very exciting. Significant in its smallness.


Meanhile, on the other side of the river the flooding is getting more serious. Remember the observation deck there which was almost in the water? It's in the centre of the picture, below, mostly under water. 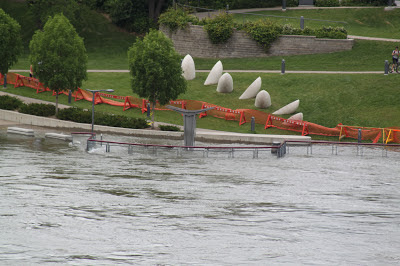 The water is probably up to your knees, or a bit higher.

Further down the river, by and under the Traffic Bridge, the water is probably over the tops of your rubber boots (or wellies, if that's what you prefer). 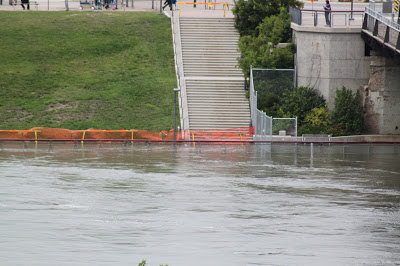 While I've rather tongue in cheek thus far, there is a serious side to his story.

The Water Authority says, even with all the water that is upriver (which flooded to Calgary and Medicine Hat), this is the high water mark we should expect to see. The flow rate is 2,000 cubic metres per second (please don't ask about gallons, that's "a lot"). Maybe a week or so like this. Meaning nobody in Saskatoon should be flooded. Nobody.

"For this relief, much thanks."  ~ Shakespeare, and Bear.

IN WHICH BEAR AND J STAY HIGH AND DRY

There is a saying about what a difference one day makes.


But yesterday was different . . .


This is (supposedly) the high-water mark for the controlled drainage of Lake Diefenbaker (the reservoir behind the Gardiner Dam). It is being emptied some, slowly, in order that the flood water which hit High River and Calgary can eventually be collected in the lake, and released slowly to the South Saskatchewan River below the dam. This was one of the reasons the dam was built in the first pace; to control high flows along the river.

One thing about this, though. In the quiet of the night, I can hear the river running, surging up against the bridge piers. (That's not normal.) It's a kind of restless but very dynamic sound — almost spell-binding. There is power there!

While I was down in the flood plain, I looked up at our apartment. It looked like it was almost in the clouds — it was that far above the ground and water.

I have some other things which I'll share with you over the next couple of days.

By the clear light of day, I could see the river had overflowed on to the observation. So we've got a bona fide flood, even if it is inconsequential. That means other spots may be flooded, too. I'll check later today. Though I think it's much ado about not very much.

IN WHICH THE FLOODS COME

Most of you, I think will have heard something about the flooding in Western Canada this weekend. The last I heard, 26 communities in Alberta were being evacuate, in whole or in part.

Among the hardest hit, Calgary and a number of communities around it, including Sundre, Okotoks, Turner Valley, Bragg Creek, Longview, Canmore, Banff, and High River (where we used to live).

There have been floods in some of these areas in 1995 and 2005. They were considered major — once in a hundred years. But they absolutely pale in comparison to what is happening now.


Prime Minister Stephen Harper called the magnitude of the flood "stunning."
The Prime Minister's home is in Calgary, and he represents a Calgary constituency (electoral district). He toured the city and area, yesterday, and said he has never seen anything like it. He says he is aware of concerns about the long-term damage the flooding could have.

Closer to home, the flood crest is well to the south and west of Saskatoon ("River City"). Yet the water is rising. These pictures are from our apartment windows. They are not startling, but show the water has crept higher than yesterday, which was higher than the day before.

We have already been told by the city that this area is one of the areas which is likely to flood first, if there is a flood.


The trees at the bottom of the picture are on our side of the river. They are likely 100 feet below our apartment. I sincerely doubt we will get wet if there is a flood.

To wrap up for today:


And Saskatoon watches, and waits, and wonders.
Blessings and Bear hugs, folks!

IN WHICH BEAR RECEIVES A LOVELY SURPRISE

Most of us know other bloggers by the ideas we share through our blogs and, occasionally e-mails notes, or twitter bursts. And we have delightful relationships which can last years.

On rare occasion we actually get to meet each other.

So Bear was very happy to learn that Deborah Summer Muth, who blogs at Miracle Sisters, was going to be in River City! (You may also know Deborah's sister, Amanda Summer, of Travels with Persephone.) Deborah was in town to participate in a international "focus group" — I'll let her explain.

Anyhow, Deborah let me know ahead that she and husband Steve were coming, and we decided to have a face-to-face visit by bloggers. Deborah and Steve were staying at a local hotel, so getting together was really easy. (Amanda had mentioned to Deborah that she would be in the Bear's territory if she came to River City; the meet was arranged — and the hotel was not declared a disaster area because a Bear was loose in there for several hours.)

The conversation; oh, my goodness! You get a self-described "environmental activist feminist filmmaker" together with a Bear who's a writer-broadcaster-pastor-ethicist, and you know it's going to be an amazingly wonderful chat. Which, of course, it was!

We could probably have talked most of the night, but Steve and Deborah had a special Father's Day date, and, um, well, . . . it would have been "not a good thing" to get in the way of that. (Yes, Bears can be socially sensitive.)

Thanks to Deb for the wonderful visit, and for Steve's picture!

Blessings and Bear hugs, all!

IN WHICH BEAR DISCOVERS THE IMPORTANCE OF "TEDDY BEARS."

And there you have it; that absolute truth. Now we know!

IN WHICH BEAR CONSIDERS AGING

There comes a time in the life of Bears (and other creatures) that we become "not as young as we used to was."

This is where the language of "old" or "older" creeps in. Sadly. There are even some who clam that, since you can retire and collect full pension at 65, that should be the age of "certifiable decrepitude." I, of course, disagree.

Mature, I can understand. But there is no such an age as "old."

Here is the explanation.

I think some of you know that; others, perhaps not.

IN WHICH WE DISCOVER A BEAR BEING DRAMATIC 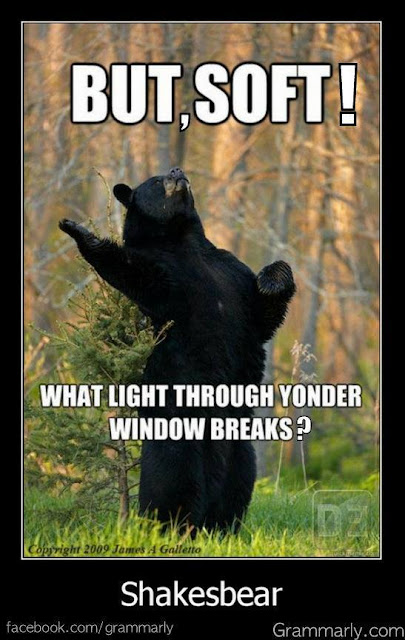 That about covers things.

IN WHICH BEAR TRIES TO RELAX 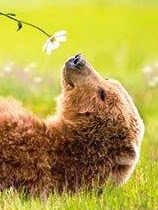 Did somebody say something
about taking time to smell the flowers?

Smart Human, that one.

Maybe it was Woonie Helen
of  Poetry Matters fame,
who supplied this Bear picture.

The Christian life as a journey, and people ought to enjoy the journey. The people who think they have arrived are the ones that always get us in trouble.  ~ John Shelby Spong.