IN WHICH BEAR DOES SOME READING AND RAKING

As many of you know, Bear is primarily a reader of non-fiction. For him to venture into a novel would be a novel experience, indeed.

One does not normally use "exciting" to describe a work of non-fiction, but there are exceptions to every tradition. And this is one of them.

The book I'm reading is called The Great Turning; its sub-title is "From Empire to Earth Community."

David C. Korten is no socialist. Born in 1937, he grew up in a white, middle-class and very conservative part of the state of Washington. He has a Ph.D. from the Stanford Business School and has taught at Harvard University's Business School.[1] That's a pretty good track record as a conservative economist.

But then, the shift. "To this day, I retain my conservative suspicion of big government. I am now, however, equally suspicious of big business and big finance. . . . Although I love my country, . . . I have seen first-hand the devastating negative impact that the economic and military policies of the US government have had on democracy, economic justice, and environmental stability."[2] But as Korten notes, by time his children had graduated from high school, they had lived (with their parents) in Nicaragua, Indonesia, and the Philippines, as well as in the US. Indeed, he has some very negative comments for what he calls the "conservative agenda" of contemporary US politics.

I'm only getting into the book, but the first 20 pages are fascinating. I'll have more in due course.

• We hosted a birthday party for our daughter-in-law on Tuesday,
• I spent much of Wednesday at the university doing ethics work,
• the Russians have not invaded Ukraine, yet,
• the Sheltie "Superdogs" are still with us, and will be for another week,

• I'm going to be leading worship in our congregation a couple of times, in the May and June (old habits die hard, and people seem to know that for some reason), and,
• it snowed last night. When the Superdogs and I went out this morning, there was snow on the ground and it was still coming down. On April 25th. (And I was just getting started on our spring work, after a day of sun and a couple of days' rain.) GGggRRrr!

1. I was leaving our church building after Morning Worship on Sunday when I was assaulted . . . by snow. Snow, I tell you! S-N-O-W, for Heaven's sakes!

Not only that, it has snowed each and every day this week, and it did last Friday and Saturday as well. 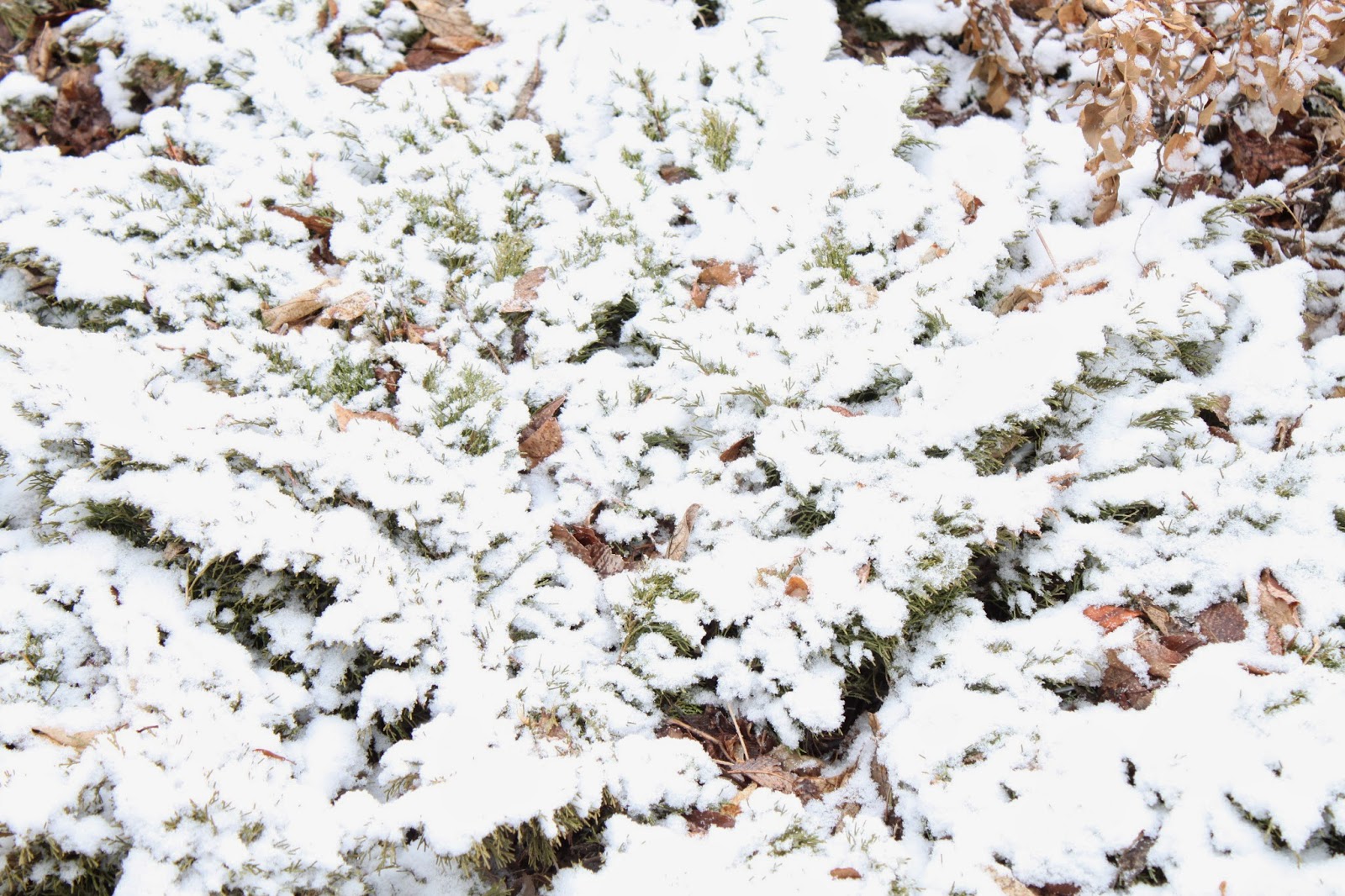 I must confess this is a bit past the time of year when people would feel this to be an enjoyable experience.
(Can you hear the collective "GGGGGGRRRRRRRR!"?) 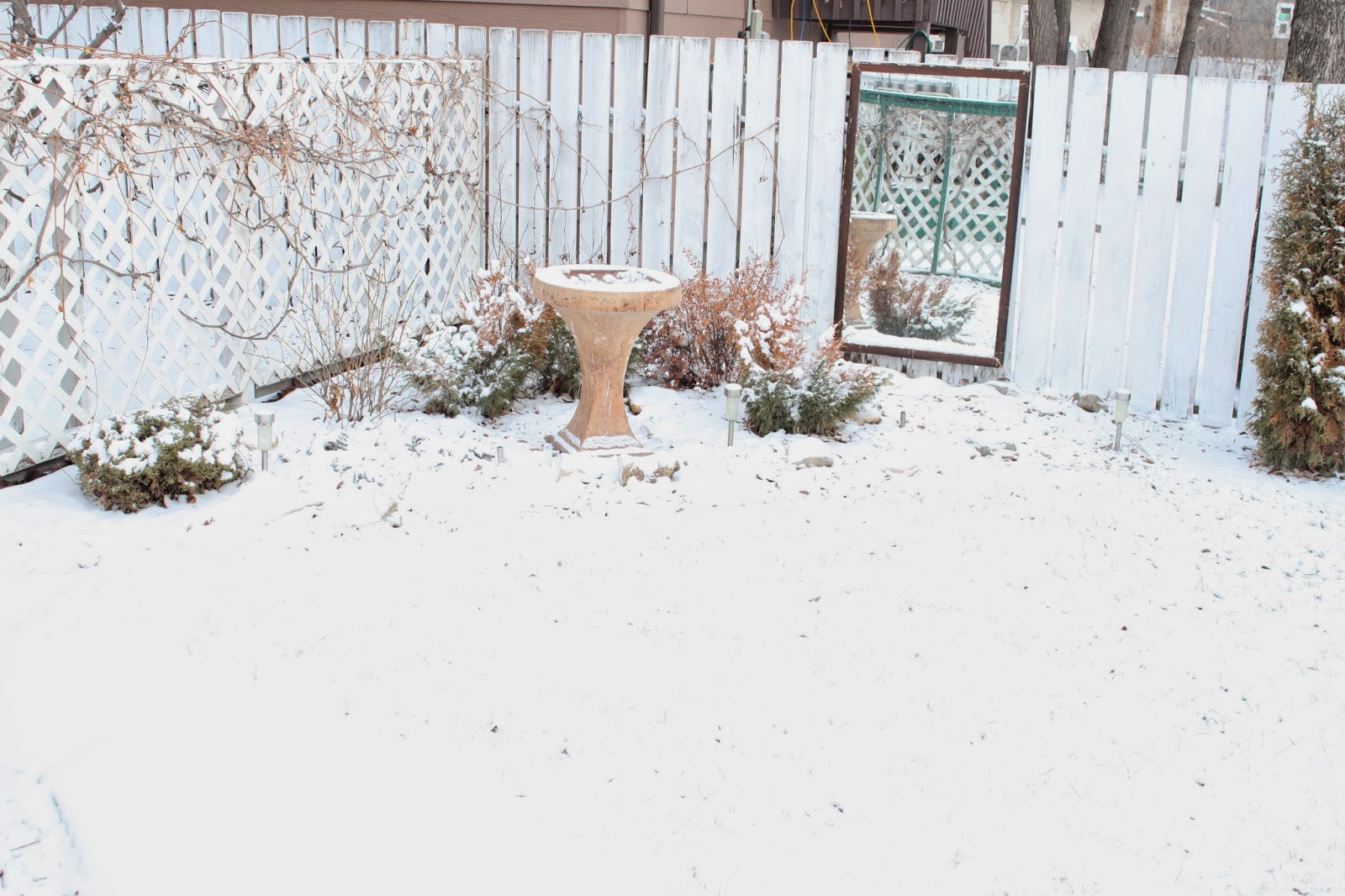 "Oh, it will be gone soon," commented one local wag. Whereupon the individual was nearly hung from the closest lamp post. Or would have been, had not a certain Bear intervened on that individual's behalf.


2.  The two "Superdogs" are still on duty. Meaning Bear gets dog therapy: set amounts at particular times, and impromptu  treatments throughout the day and night. 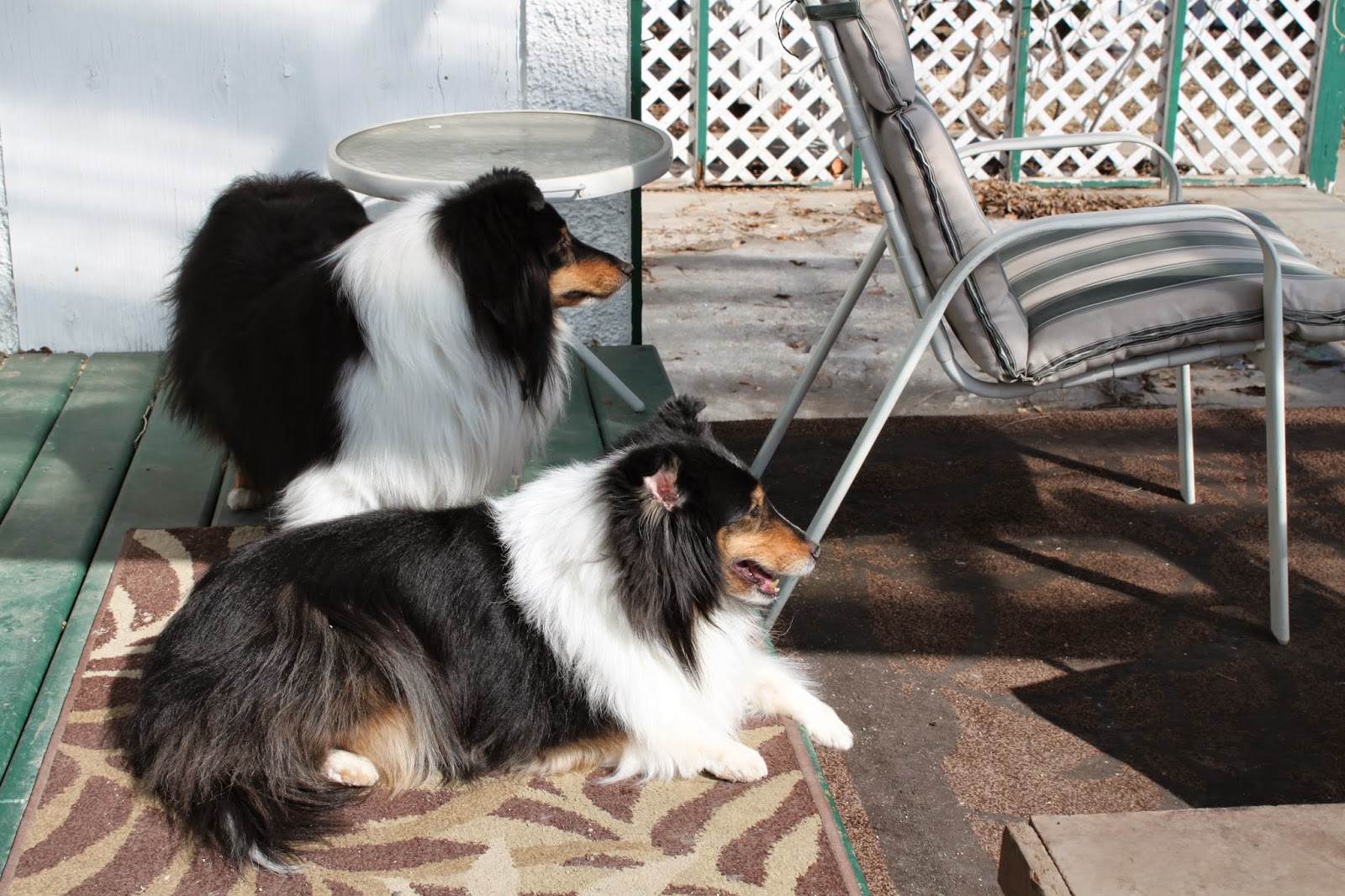 Bear wishes to report he is feeling much better. Shadow (above) and Salsa (below) are none the worse for wear. Apparently.

The one downside is that they're normally so close that I have to each very carefully that I do not run over them with my desk chair, or trip over them when I get out of bed.


3. I know that quite a few of your are bibliophiles (lovers of books), and writers of books, too. Well, Bear has joined your ranks as a writer.

a. A certain doctor of my acquaintance has been bugging, encouraging, nagging, and persuading me that I should write a book. Perhaps a book for children. Perhaps something about Bears. I know she means well, and she has my best interests at heart. But to shift from journalism to authorship? Hmmmm. Anyhow, she thinks I would benefit from a book. Frankly, royalties aren't that great, but, well, um, I have given up, acquiesced, thrown in the towel of resistance. I've written three whole pages.

b. Then, lo and behold, a certain Bear appeared in my household. I have no idea where it came from, or how it got here. If I were more suspicious, I might say this seems all too Paddington-esque. (You do know Paddington Bear, don't you?)

At which point your intrepid reporter grabbed his deer-stalker hat and camera (much better than a magnifying glass), and started his investigation.

• Brown Bear (undersized, perhaps malnourished)
• Not talking (this is going to be difficult)
• Grey slouch hat and blue bags, all marked "Canada Post." The normal gear of a letter carrier. That's clear enough.

Despite his silence, I was, however, able to learn that his name is Ballentyne. Not sure if that is his (yes, he's a he) first name or last name. A matter of mental telepathy. Or at least I would have you believe that.

As my grandson would say, "To be continued."


4. It has been a bit snowy over the last week. It's well past the middle of April, and most of us have had quite enough of this. But, well, it's snowing as I write. And this is a winter country. And climate change is happening, at least in part because of all the gunk being tossed into the air. 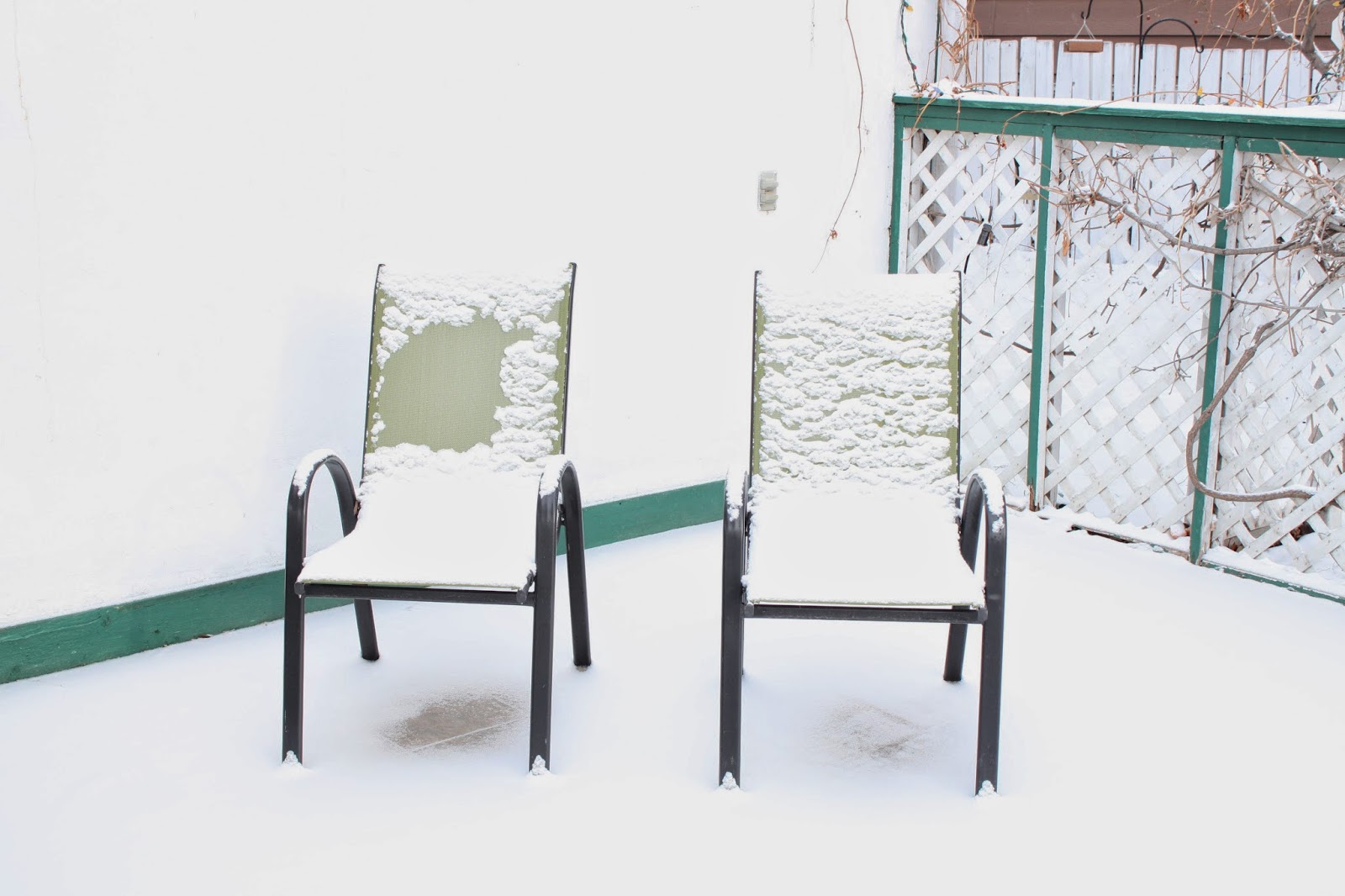 Garbage in, garbage out (as the computer programmers would say).


5. This is the "Easter Weekend" or Triduum.  Today was Manudy  Thursday; tomorrow, Good Friday (how one considers a nasty public execution a good thing is, well, hmmmmm); Sunday, the Christian Festival of Easter, or Resurrection. Lots and lots of activity in churches, including ones like ours. After a lifetime of planning such things, I'm glad I'm not responsible for all that activity this year.

6. Some time ago I might have mentioned I was getting more serious about writing poety. Well, I have two contributions in various stages of preparation. I hope at least one will be up on my poetry blog by the end of this month.

7. You may have noticed that Bear has been making changes to his blog. A few more will be coming. Nothing drastic.

8. Did I mention we have had a lot of snow in the last week?

Overcast with light snow, temperature of 1C (34F) with the wind chill down to -6C (21F) Outlook for tomorrow, rain in the morning, afternoon and evening, with a possibility of isolated showers and/or snow on Saturday and Sunday. (There are words for such situations, but this is a family-rated blog, so I won't include them.)

IN WHICH BEAR TRIES TO UNDERSTAND AMERICAN HEALTH CARE

Bear, being Canadian, lives within a nationaly-integrated veterinary health care program, paid through our taxes. Meaning, we have moved past the era of paying for health care when we receive it. (That's not entirely true; we do have to pay for some things up front: a medical checkup for a driver's licence, or cosmetic surgery [thought not for  reconstructive surgery], or the "plaster" for the cast that's put on your arm if the arm is broken, or physiotherapy, or chiropractic services). That, I understand. Most services — core, essential services — are paid for through our taxes.

So I don't really understand this bit about people having to pay a couple of thousand dollars a month for basic health care (or seniors paying the same, individually, because of their long-term health problems). Yet, that's the information I get from American friends. And the American media.

As I understand it, the Patient Protection and Affordable Care Act (to use it's full title) was designed to
1. increase the quality and affordability of health insurance,
2. lower the uninsured rate by expanding public and private insurance coverage, and
3. reduce the costs of healthcare for individuals and government. (Thus, Wikipedia.)[1]

So, what's the problem?

I have had to consult Americans further about this. One of those is Andy Borowitz, an editorial writer The New Yorker magazine. He has this uncanny ability to understand what's happening (and put a satiric twist on it). In this case it is the Affordable Care Act (ACA, or Obamacare). Consider the following.

BOEHNER: “I DON’T WANT TO LIVE IN A WORLD
WHERE SEVEN MILLION PEOPLE GET AFFORDABLE
HEALTH CARE
POSTED BY ANDY BOROWITZ

WASHINGTON (The Borowitz Report)— A riveting scene unfolded in Congress today as a tearful Speaker of the House rose to tell his colleagues, “I don’t want to live in a world where seven million people get affordable health care.”

Tears streaming down his cheeks, Rep. Boehner appeared unable to maintain his composure as he delivered a speech interrupted by blubbering and sharp intakes of breath.

“What kind of a world is it where anyone can go on the Internet and get health care they can afford?” he said. “Not a world I’d care to live in, or leave to my children.”

“It’s not right… and it’s not America,” he said, breaking down. Later, dabbing his eyes, a still-sobbing Boehner apologized to reporters for “losing it up there.”
“I don’t like to get so emotional,” he said. “But when seven million people signed up
for Obamacare, a part of me died.”

OK — the piece from Borowitz is satire; it never happened (at least not the way Andy tells it). Yet I have every reason to believe that what Borowitz wrote is a serious reflection of  some major American attitudes. There are, apparently, many people who don't believe they, and others, should be able to get effective health care at a reasonable price. And, no, I don't think $2,000 a month is reasonable.

What well and truly puzzles your Bear is why anyone would oppose something which would significantly help people, especially sick people. If "bear one anothers' burdens" means anything at all, why not on this issue?

Or, to the recall the Beatles perspective, "We get by with a little help from our friends."

But, then, I'm a Canadian Bear, and many things American puzzle me. (Likewise, I'm sure many things Canadian puzzle Americans, and others.)

Currently, it's partly cloudy and 5°C (41F). We were supposed to get snow this morning, and there was a biting wind coming from the east — but no snow fell! Over the next five days, the high temperatures are supposed to range between 6 and 13C — that's 43 to 55F. (I don't want to jinx the situation by saying that spring has finally arrived, but the prospects are wonderful!)