IN WHICH BEAR INVITES YOU TO SOME PURE ENJOYMENT

So, maybe I'm a bit strange (but you already knew that). Not only strange in my behaviour, but in my taste in music (according to some). Classical, to be precise. Not the Foo Fighters. Classical music. Beethoven, Bach, Chopin, Handel, Mozart, Tchaikovsky, Vivaldi, and the rest. High octane music, gang!

Sorry for the digression; sometimes I get just too darn excited!

But this is a lot more fun than even Williams with an orchestra. Check it out.

(BTW, if you don't want to take five minutes for something wonderful, please move on to the next blog. Well, this time, only.)

IN WHICH A POEM FAILS TO MATERIALIZE.

Well, it's like this. Some days, despite a poet's best efforts, a poem fails to materialize.

I have been working on a poem for some time, but in the end it seemed trivial, inconsequential, forced, and unnatural. And those are some of the nicer words I could use about it.

Now, am I going to unleash something that horrid on my readers?  No, I am not. Which is why "Coffee and Toffee" will continue to be the latest contribution to my poetry blog. (And that is now a couple of months old.)

I promise that I will try to do better, friends, and post pomes more frequently. Good poems, not gibberish.

In the meantime, blessings and Bear hugs.

IN WHICH BEAR MEETS A CAT

I feel so silly about this, that it's taken we a while to write. Really, it is all quite bizarre.

Yesterday morning, a technician hauled invited me into a procedure room, and helped me onto a movable table. Then she brought in a huge, black Labrador Retriever. He jumped up on the table, sniffed and licked different parts of me, and gave his Lab report.

Then she brought in the Cat. She took it out of it's crate and ran it over me twice, to get the CAT Scan. And I didn't get scratched once. (Well behaved cat, actually.)

It was one of those days.

Actually, though, that's not what happened. Not at all.

You see, a couple of delightful looking Humans filled me up with something called a "contrast medium." (I think that's doctorese for "dye.") It would be a tastier drink with something in it like cranberry juice, or bourbon (if you can tolerate bourbon).

Then, another technician ran the moveable table back and forth through a huge donut with the label "Siemens" on it, while I held my breath. (I did that, not because of being scared, but because some voice, which appeared out of nowhere, told me to hold my breath.) The experience was sort of like ducking your head as you go under a low door frame or ceiling. Nothing about which someone — Human or Bear — should get excited.

Anyhow, the machine, called a "SOMATOM," produced a Computed Tomography (CT) scan, or series of scans. (But, no, I didn't get to eat a piece of the donut for being a good Bear.)

The "pictures," according to the technician, who had talked to the radiologist, were just fine. So they let me go.

I see my surgical specialist a week from this Monday — ten days, roughly. Then I find out what that all meant. Which, I suppose, is not much of anything. But what does a Bear really know?

Ironically, they're doing all that diagnostic work when my pancreas is feeling much better. But not entirely well. And it is important that one have a functional pancreas. The pancreas produces a number of enzymes (and the like) which help to digest the food. The Islets of Langerhans in the pancreas produce insulin, which keeps one from becoming diabetic. But if the enzymes cannot reach the intestines, to digest food, they will start to "digest" the pancreas itself. Which is painful, and a whole lot of "not fun," as well as "not a good thing."

Anyhow, after several months of mild to (occasionally) extreme pain, we may be closer to having an answer for what is making your friendly, neighbourhood Bear so uncomfortable. And, yes, I will bore you with the details. (That's a promise.)

In the meantime, blessings and Bear hugs!

IN WHICH BEAR GOES ONE STEP TOO FAR

I try to get along with Humans. But being friendly sometimes doesn't work out to my benefit. I'm sure you understand.

I think I'm clear enough about that.

IN WHICH THINGS ARE NOT SO "NORMAL"

No flooding in River City. Things are a bit cleaner, for all the rain.

But continuing rain and soggy soil does lead to other things. Like soil erosion. And riverbank cave-ins. 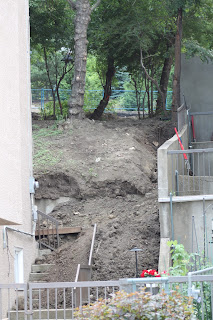 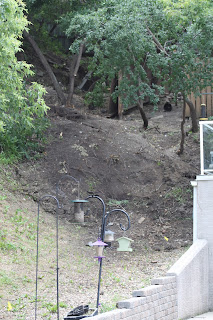 These happened in roughly the same locations as the land slides about a year ago. People put enormous houses on the crest of the riverbank; the weight of the houses plus lots of water, have loosened the land and we got — landslide! Some of this is only a building or two from where we live.

Fortunately, when the building of this apartment was done, lots of shoring was arranged for the riverbank. I don't think our building is about to move. Anywhere. 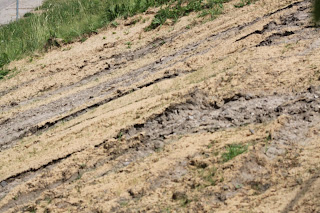 Meanwhile, where the city removed one span of the Traffic Bridge, it thought it would seed the riverbank, in order to help it stay firm. Sadly, heavy rains have cut through some of the area — here are huge gullies in the land which has been seeded.

But some things carry on. A Robin keeps watch from a very effective sort of sentry post. 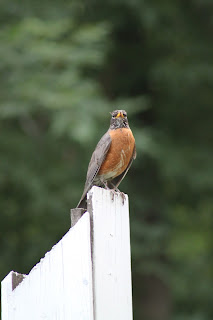 The City of Saskatoon issued a recommendation for residents of eight properties along 11th Street and Saskatchewan Crescent to voluntarily evacuate. The City has been monitoring a slope failure between the two streets since June 25 and is concerned over recent results showing approximately one metre of lateral movement since June 25 and a recent daily average movement of three centimetres.

I guess the landslide must be getting serious, or more serious. Or something. Fortunately, we're not included in this recommendation. Which is good.

IN WHICH THINGS RETURN TO "NORMAL"

The sky over River City is blue, accented by friendly, white, fluffy clouds. The tennis players are back on the courts. 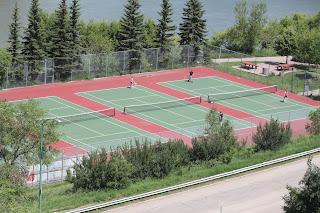 Where there was flooding, the waters have receded. 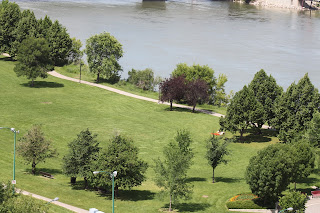 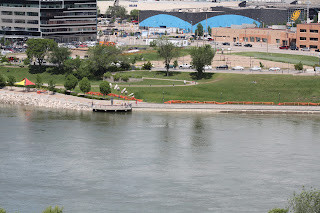 Where the river was churning and foaming, things are once again quiet. 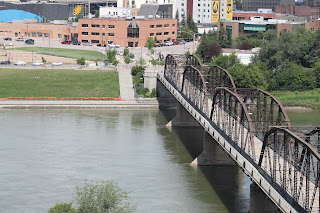 All of this is good. No reports of property damage. No deaths or injuries.

Elsewhere, however . . .
People in High River, Alberta, are returning to their homes, trying to clean up and assessing the damage.

Some places have been so badly damaged that they will have to be torn down, and folks will have to start over. There are estimates that it will take a year or more for some people to be resettled. (Bear thinks is it likely to be "more.") One couple was taking the wife's sister's family into their place for the duration. Now that's love!

For those flood survivors who do not have a place to stay for the summer, the student-vacated dorms at the University of Calgary are being opened. That will work reasonably until the students return in September. After that, um. . . .

And in Calgary, which has already been damaged so badly, rains this week re-flooded one neighbourhood which was just starting to dry out and recover. I believe you would call that adding insult to injury, or something like that.

On the other hand, The Calgary Stampede is up and in full operation, two weeks after being seriously flooded. This, with the help of locals. The organizers of what they call "The Greatest Outdoor Show On Earth" appealed publicly for assistance to get this show ready to go. They expected maybe 500 folks would help, and they opened an on-site office to welcome the helpers. Except that more than 2,000 volunteered to get the the Stampede operating. The last thing I heard was they had too many people for the work that needed to be done. But, better too many than too few.

Meanwhile. . .
A number of things are taking place at the home of the Bear.

1. Bear and his beloved J are making some adjustments to the den. We're turning it from our three-season apartment into our summer cottage. The lake (heated swimming pool) is great, and there are opportunities for cookouts on the cliff (balcony) overlooking everything.

Wouldn't it be great if you could move to the summer cottage without leaving home. Sorta like "Hotel California": "You can check out any time you like/but you can never leave."

2. Truth is, we expect that the Cubs will be spending quite a bit of time at the cottage this summer. Their parents are doing major modifications to their house, with the help of a contractor and the Cubs' other grandfather (a skilled tradesman; he works with tools instead of words, and he is good at what he does).

3. Bear has been busy at his poetry desk, and will have something new on his "pomes" blog, Life in the Urban Forest, later this week. (NO, not today; more like Friday.)

And, that's the news. Blessings and Bear hugs til next time.